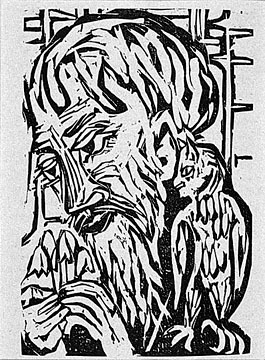 Since the dawn of humanity, individuals have contended with the sublime and unforgiving power of nature. However, by the 20th century, modern issues, such as industrialization, urbanization, and war, had distanced humankind from the natural world that was once integral to their everyday lives.

This struggle between modern life and nature is a theme that was often explored by artists of the 20th century. The use of the old-world medium of woodcut prints to either depict scenes of modern society or the natural world added another dimension to the debate over which environment was superior.

Modernity vs. Nature: 20th Century Woodcut Prints explores the dialogue between the natural materials used in woodcut printing and the contrasting subject matters of modern life and nature utilized by 20th century artists.

This exhibition is curated by Teresa Ferguson, SUNY New Paltz Art History major and intern at the Dorsky Museum.