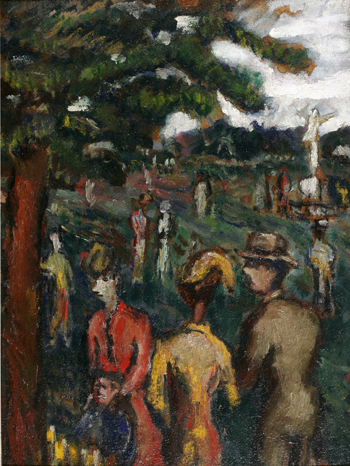 Eugene Ludin’s Maverick Festival depicts the colorful, spectacular festival for which the Maverick Art Colony became known.  Hervey White created the Maverick Festival in 1915 to help foot the bill for colony expenses, including building a well. The festival became an annual event, on the full moon in August, when the colony would be transformed into a wild bacchanal including live entertainment and a costume ball, documented in photographs seen throughout the exhibition, including many of the Cramers. Each festival had a different theme for which festival-goers made costumes, seeking to outdo one another in inventiveness and flamboyance. The cultural identity of Woodstock as a “hippie town” has its immediate origins in the Maverick festivals, of which the legendary 1969 Woodstock Music Festival is a later incarnation. The Maverick festivals came to an end in 1931, having become too large and too out-of-hand to continue.